A 2019 Guide to Social Security Planning 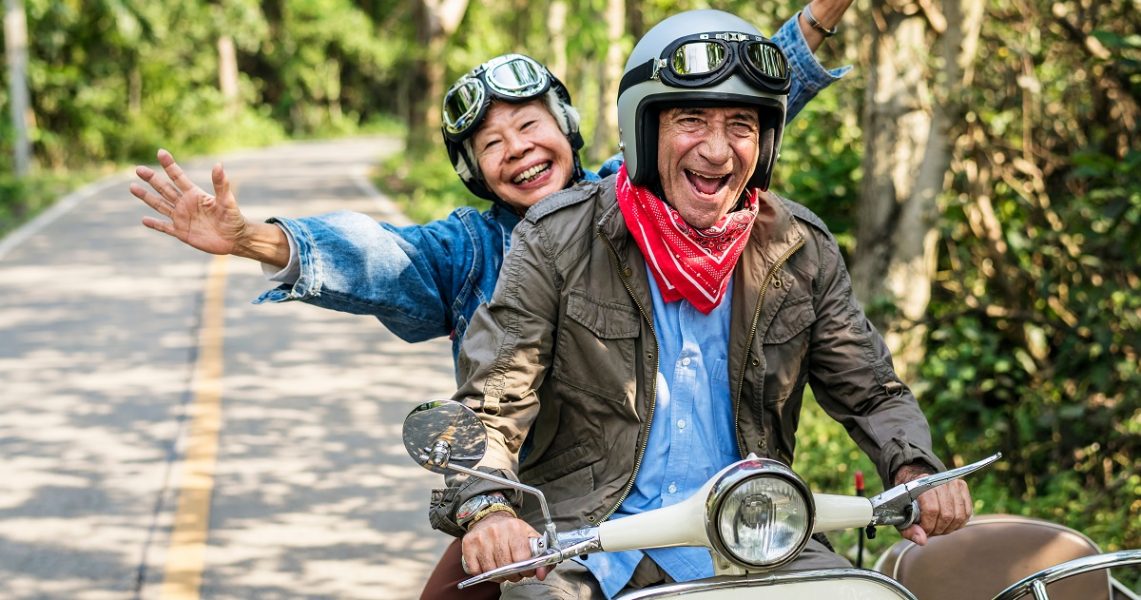 Everyone has a different balance sheet, life goals, family histories, health conditions, lifestyles, and luck. Each one of these variables will determine when you will start claiming Social Security.

When Should I Claim Social Security?

Clients often ask me, “when should I begin claiming Social Security?” It depends. Tell me when you are going to die. It’s annoying, but it’s true. There is one variable omitted from the list above: life span.

Social Security actuaries have it all worked out. They look at the whole country and do the math. They know some people will die early and some will die later.

To the government, it makes no difference when you claim for Social Security. But it matters to you. Because the age you file determines your permanent monthly benefit.

The longer you wait to file for Social Security, the higher your benefit will be (until age 70). But how long is too long to wait? Monthly benefits increase with claiming age, but they aren’t life insurance premiums. Social Security benefits fall under the category of “use it or lose it.”

If you are in good health and you plan to keep working later in life, you may wait to claim until as close to age 70 as possible. If you are just getting back from a visit with the oncologist, you may start claiming sooner rather than later.

There are several calculators online – we do custom Social Security simulations for clients at Bodnar Financial – that can help you play around with variables and game out different claiming strategies. But at the end of the day, your Social Security claiming age will be your best educated guess.

There are two Social Security phrases you need to know:

Your Primary Insurance Amount is your base monthly benefit. This is the amount of Social Security benefits you will receive if you file at your “full retirement age.” It is calculated at age 62, based on your highest 35 years of earnings.

If you earned the Social Security maximum every year for 35 years, you would qualify for the maximum PIA, which is $3,030 for those turning 62 in 2019. If you worked less than 35 years, or had several low-earning years, you can increase your PIA by working longer and earning more. 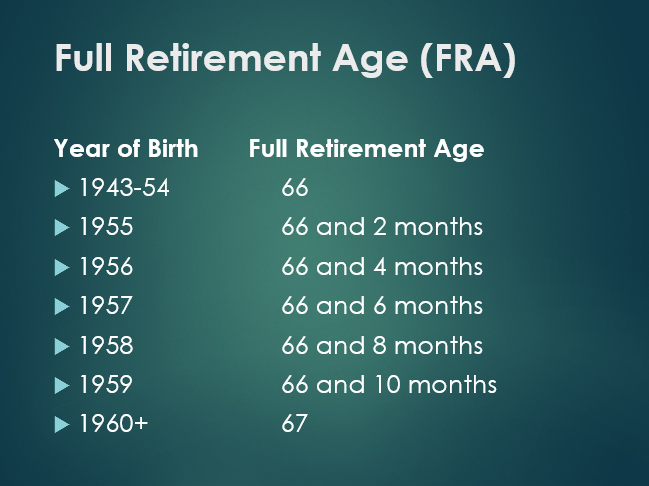 Full Retirement Age (FRA) is the age the U.S. government decides you can claim full, unreduced Social Security benefits. It used to be 65 for everyone. Now, a higher age is being phased in as a result of the 1983 Social Security Act. 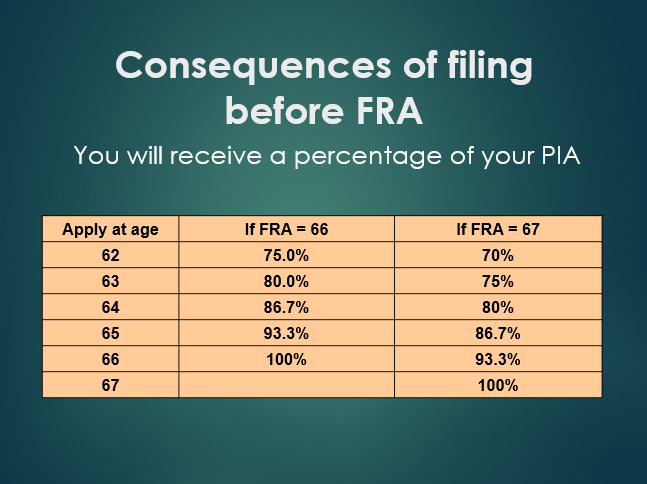 The PIA percentages above are prorated monthly, not rounded up to the nearest age. So, there are a bunch of percentages filling in the gaps in between these nice round numbers.

Your benefit stays at this percentage FOR LIFE. It doesn’t increase to 100% when you reach full retirement age. There is a permanent consequence to claiming Social Security too early.

Does Social Security Adjust for Inflation?

When there’s inflation, your benefit will get a cost-of-living adjustment. In theory. Sometimes the government decides it’s not necessary, so they skip it. This was true in 2010, 2011, and 2016, when the COLA adjustment was zero.

I received a lot of angry calls from my father during those years. Fortunately, the 2019 cost-of-living adjustment was 2.8% of your monthly benefit amount.

This is another reason to wait as long as possible to claim Social Security benefits. Think about it- the COLA is a percentage of the benefit amount. So, the higher the monthly benefit, the higher the COLA adjustment. The advantage to delayed claiming is even greater than most people realize.

Living in a two-income household? Spousal benefits may be paid even if both spouses work.

2) The primary worker must have filed for benefits. (Ex. If Jill wants to claim a spousal benefit based on Jack’s work record, Jack must have already filed for his own Social Security benefit.)

3) A spouse must be at least 62 to file for a spousal benefit. (But keep in mind, 62 is not FRA. If the spouse claims the spousal benefit at 62 the benefit will be reduced.)

4) Spousal benefits do not earn delayed credits after age 66. The most a spouse can ever get is 50% of the other spouse’s base monthly benefit.

A Hybrid Strategy for Married Couples

When it comes to Social Security claiming, later is better. Unless you need cash right now.

Life is complicated. The best strategy on a spreadsheet does not always jive with your financial reality. The key is to coordinate your spousal claiming strategy in a way that will give you the short-term cash flow you need, while protecting your long-term interests.

What if We’re Divorced? Can I Claim Benefits Based on My Ex’s Work Record?

Yes. A divorced person may claim spousal benefits based on an ex-spouse’s work record. The rules for divorcees are like the ones for married couples if:

If you have more than one ex-spouse in your past, if the marriages each lasted 10 years or more, you can choose which spouse’s record to claim benefits on. The order of the marriages and divorces doesn’t matter.

Also, more than one ex-spouse can receive benefits on the same worker’s record, as long as the marriages lasted at least 10 years. The benefits paid to one ex-spouse do not affect those paid to the worker, the current spouse, or the other ex-spouses. This is good news if your ex-spouse has remarried a couple of times.

Jody and Joanna could have each claimed divorced-spouse benefits on his record, because those marriages each lasted more than 10 years. When he died in 1985, both Jody and Joanna could claim divorced-spouse survivor benefits, and Alexis could claim a regular survivor benefit because she was still married to him when he died. His second wife Joanne was out of luck because that marriage lasted only nine years. Unfortunately, close doesn’t count!

Survivor benefits are worth twice as much as spousal benefits: 100% of the worker’s PIA instead of 50%. Widows and widowers may receive survivor benefits if the marriage lasted at least nine months, except in case of accident. The survivor must be at least 60 years of age to start collecting benefits, or 50 if disabled.

If the widow or widower applies before full retirement age, the benefit will be reduced like it is for regular retirement benefits. If both spouses are receiving benefits and one spouse dies, the other spouse may switch to the higher benefit.

The widow will receive the highest income if:

Higher earning spouses who feel young and healthy don’t often think about how the timing their Social Security claims will affect a future survivor benefit. But this decision will have a significant impact on your spouse’s standard of living in the event of an untimely death.

If I Work Part-Time in Retirement, Will I Lose Social Security Benefits?

If you claim benefits before FRA and work, your benefits will be withheld. This is called the “earnings test.” It prevents people from collecting their entire retirement benefit while simultaneously earning money from a job. 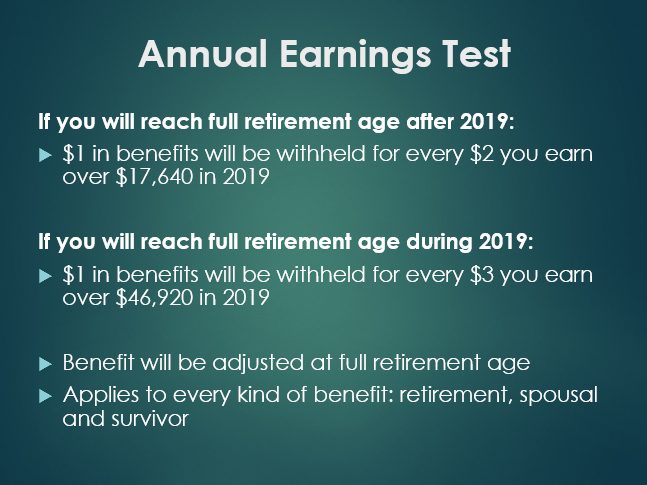 If you have already reached FRA, the Social Security earnings test doesn’t apply to you at all. You are free to earn as much money from working as possible without any effect on your Social Security benefits.

If you get dinged by the “earnings test,” don’t panic. This money isn’t truly taken away. Your benefit will be adjusted upward when you turn full retirement age, as if you had applied later.

So, if some of your benefits are withheld due to the earnings test, your new benefit will be higher, as if you had started at 63 or 64 or 65, instead of 62. This can be advantageous if you filed at 62 and regretted it.

Don’t let the annual earnings test discourage you from working. The more money you earn, the more money you will have. Social Security does not “penalize” you for working. Once the adjustment is made, you will end up with a higher benefit for the rest of your life.

And, of course, the earnings themselves will contribute to your financial well-being. To avoid the earnings test entirely, you can wait until you are full retirement age or later to apply for benefits.

The earnings test applies to every kind of benefit: retirement, spousal and survivor. It may even cause your spouse’s benefits to be withheld. If John and Karen are 62 and Karen is getting a spousal benefit off John’s record, and John goes back to work, then Karen’s spousal benefit will be withheld.

Self-employed people beware- you might be held under extra scrutiny. The government is on the hunt for business owners who pay themselves a small salary in order to get around the earnings test.

Do Social Security Benefits Get Taxed?

You bet your Uncle Sam they do. You didn’t think the government would skip a chance to take one last cut before giving your hard-earned money back, did you?

The amount of tax you’ll pay depends on how much other income you have. This table shows the taxation of Social Security benefits based on various income levels. 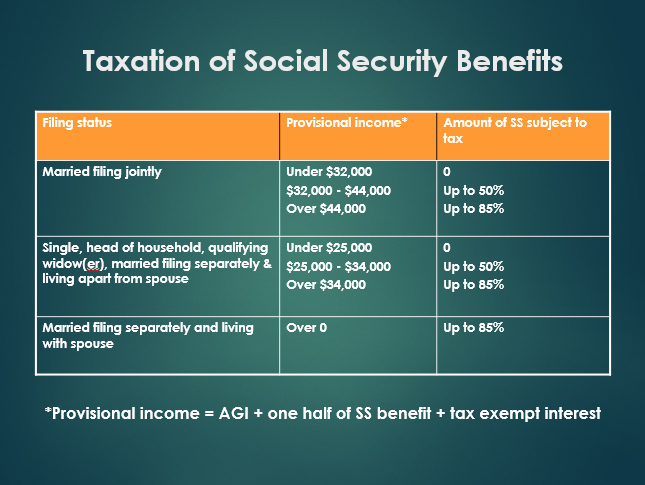 “Income” in this case means provisional income, which includes adjusted gross income, plus one-half of the Social Security benefit plus any tax-exempt interest.

Up to 85% of your Social Security benefits may be subject to tax, depending on how much other income you have. Incredible, right?

You can minimize taxes on Social Security by lowering your other income, especially investment income. Be aware that municipal bond interest, which is usually tax free, counts as income for the purpose of calculating the tax on Social Security benefits.

The math is going to be different from person to person. That’s why it’s important to consult with your accountant and financial advisor on a yearly basis, as your life circumstances evolve.

Life’s too short to worry about money. Let Bodnar Financial run a customized Social Security simulation for you. Call the office today to make an appointment.