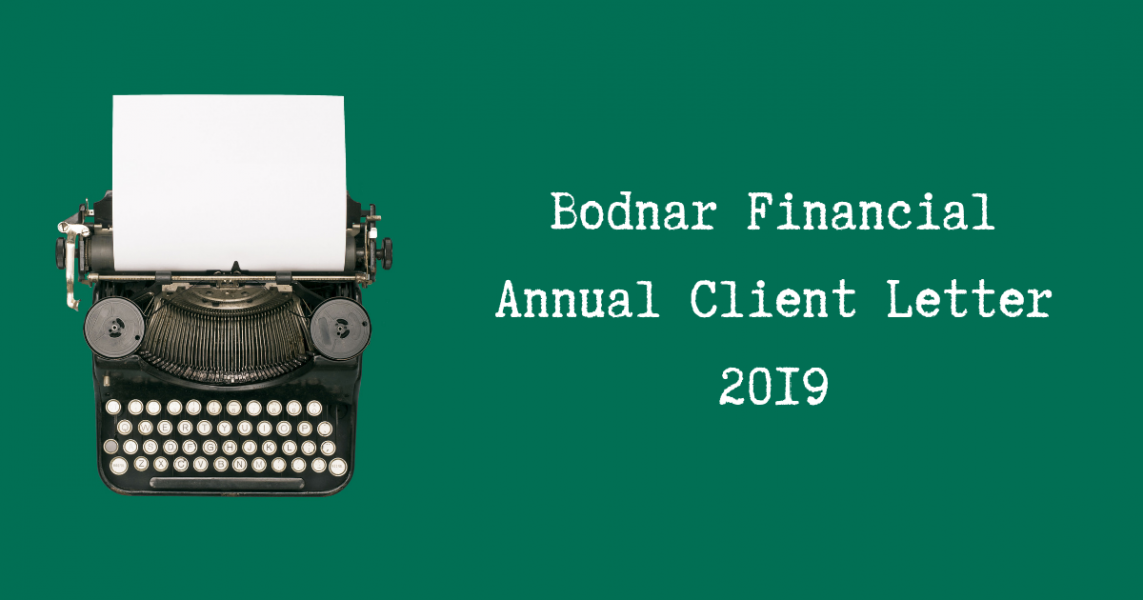 Clients and Friends of Bodnar Financial,

Given that 2018 was the first losing year for common stocks since the Financial Crisis of 2008-2009, I have broken down this year’s annual client letter into two separate components:

Bodnar Financial Advisors was founded in 1988 with a goal-focused and planning-driven philosophy. Our plans are not motivated by current events, or the closing value of a common stock on any given day. We don’t forecast the economy or attempt to time the markets. In a sentence that always bears repeating, “I’m a planner rather than a prognosticator.”

Instead, we collaborate with clients to define personal goals, build a long-term investment plan, and fund the plan with a responsible portfolio. Once a plan is in place, I coach clients to stay the course so long as their long-term goals have not changed.

Network news would have you believe there is much to fear when it comes to the daily, monthly, and yearly fluctuations of the market (“… and we’ll tell you exactly what disaster lies ahead, right after this commercial break!”).

This is where my real work begins, managing the emotional side of money. Successful investing is a brutally counter-intuitive practice. My job is to prevent investors from taking short-sighted (and often fear-based) actions that will sabotage their financial goals.

I’ve found the more often investors change their portfolios in response to market fears or fads, the worse their long-term results. Every successful investor I’ve ever known was acting continuously on a plan. Failed investors, in my experience, react to current events in the economy and the markets.

Markets don’t lose money. People lose money. As I’ve said in many missives’ past: the most responsible action investors can take is often no action at all, especially in the face of market volatility.

Bodnar Financial does not vilify volatility. In fact, we celebrate it. Volatility is the oxygen that fuels investments to grow exponentially over the course of a lifetime. The occasional 20 percent sell-off is the “zig” that allowed for the Dow Jones Industrial Average to “zag” from 11,497 to 22,948 in the last 20 years alone.

Investments that don’t fluctuate are simply savings accounts, and a savings account has about as much growth potential as hiding money under a mattress.

(Ask your grandchildren which investment they would prefer to inherit after inflation: the one feasting for decades on the S&P 500’s average annualized total return of 9.8%, or the Bank of America savings account with a standard annual interest rate of .03%.)

Volatility is one of several required macronutrients in a well-balanced portfolio, which is why we meet annually with clients to re-evaluate their plans. We make sure asset allocation is still appropriate for the individual’s age, cash flow, risk tolerance, and liquidity needs. To me, this is the true definition of success: are you achieving your life goals with a sense of financial security? Or are you waking up in the morning and worrying about money?

The performance of a portfolio relative to an arbitrary benchmark is largely irrelevant to a person’s financial success. After all, you take your income to the supermarket each week, not your account values. The only benchmark of true significance is whether you can afford to live your best life.

We measure risk as the probability that you won’t achieve these goals. Our investing strategy has the exclusive objective of minimizing this risk. We are in it with you for the long haul. It’s not about your month, it’s about your life.

Two thousand eighteen was perhaps the oddest year I’ve experienced in my career as a financial advisor. Most importantly, it was one of the truly great years in the history of the American economy, and by far the best one since the global financial crisis of 10 years past. Paradoxically, it was also a year in which the equity market could not get out of its own way.

Space does not permit me to list all the major metrics of the economy which blazed ahead in 2018. Worker productivity, which is the long-run key to economic growth and a higher standard of living, surged. Wage growth accelerated in response to a rapidly falling unemployment rate.

But the equity market had other things on its mind. Having gone straight up without a correction through 2017, the S&P 500 came roaring into 2018 at 2,674 – probably somewhat ahead of itself, as it seemed to be discounting the entire future effect of corporate tax cuts in one gulp.

A 10 percent correction ensued in February, followed by several months of consolidation. The advance resumed as summer waned, with the Index reaching a new all-time high of 2,931 in late September.

It then went into a savage decline, falling to the threshold of bear market territory: The S&P fell to 2,351 on Christmas Eve, off 19.8 percent from the September high. A rally in the last week of trading carried it back up to 2,507, but that still represented a solid six percent decline on the year, ignoring dividends.

Two thousand eighteen thus became the tenth year of the last 38 (beginning with 1981, the year I entered the glorious business of financial planning) in which the Index closed lower than where it began. At the long-term historical rate of one down year in four, that’s just par for the course.

The major economic and market imponderable in 2019 is trade policy, which in the larger sense is an inquiry into the mind of President Donald Trump. (Use this section, my dear clients, to insert your most recent POTUS anecdote).

I think it is fair to say, as the economist Scott Grannis recently did, that “Trump has managed to reduce tax and regulatory burdens in impressive fashion, but his tweets and his tariff threats have created unnecessary distractions and unfortunate uncertainties, not to mention higher prices for an array of imported consumer goods.”

These and other uncertainties, perhaps chief among them Fed policy and an aging economic expansion (10 years since our last recession!), were weighing heavily on investor psychology as the year ended. For what it’s worth, my experience over the past 38 years has been that negative investor sentiment (and the resulting equity price weakness) have usually presented the patient, disciplined long-term investor with enhanced opportunity.

As the wise and witty Oracle of Omaha wrote in his 1994 shareholder letter, “Fear is the foe of the faddist, but the friend of the fundamentalist.” (Did you really think you were going to get out of this letter without a Warren Buffet quote?)

I leave you with a short financial planning mantra for 2019…repeat daily, more often if you find it necessary:

Team Bodnar Financial wishes you and your family a happy, healthy, and prosperous 2019.