I had trouble deciding on a headline for this quick note, so I will give you the option of three:

A note on the recent unpleasantness in the stock market,

Why watching the news is a bad habit,

I don’t always consume the NEWS, but when I do, I read it rather than watch it. Consume wisely my friends…

Longtime clients know that I refrain from commenting on every bing-bang-bump in the capital markets. But after two years of unusual compliancy IT finally arrived.

We knew it was coming at some point, but as usual we didn’t know when. Nor what it would look like, or what would trigger it. Despite the media’s claim to the contrary, the network news talking heads don’t really know what triggered it either.

To put the decline of February and early March into context: when looking at most of our client accounts through Friday, March 2’s close, they are essentially back to where they were during the last week of December. In other words, those wonderful statements from January? They were a mirage.

The volatility and trading activity of the past several weeks has now reversed the “goldilocks” environment of the past two years. At the low during the first week of February, the S&P 500 flirted with the technical definition of correction (a -10% drawdown), and volatility has most certainly spiked.

This is more akin to what normal markets look like, although that does not make it sting any less, or cause any less anxiety to investors who grew accused to the smooth upward ride we’ve been on.

From an economic perspective, there is very little change to the trends we have been observing over the last year. Earning growth continues to be strong, growth is improving, unemployment rates are low (and have held steady) and inflation remains modest. The sell-off is more about “what if” scenarios rather than facts and data.

Using history as a guide, we investors in the capital markets should anticipate that equity markets will experience trends roughly resembling the following over our investment lifetimes:

I often use the following illustration from JPMorgan’s “Guide to the Market,” which shows the historical intra-year drawdowns mentioned above. 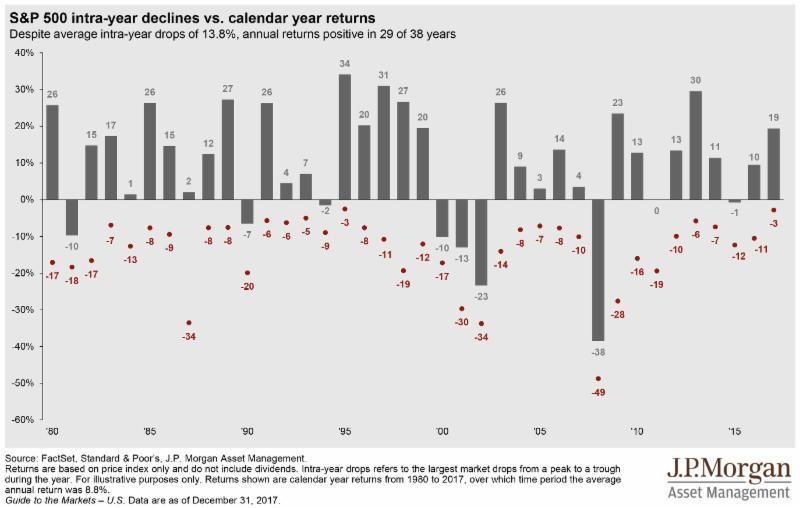 On March 9, 2018, the bull market in U.S. stocks will celebrate its ninth anniversary. As a birthday present, I end with a passage from Professor Steven Pinker’s new book Enlightenment Now — which is a reminder to me why I read the news, instead of watching the news:

News is about what happens, not what doesn’t happen, so it features sudden and upsetting events like fires, plant closings, rampage shootings and shark attacks. Most positive developments are not camera-friendly, and they aren’t built in a day. You will never see a headline about a country that is not at war, or a city that has not been attacked by terrorists – or the fact that, since yesterday, 180,000 people have escaped extreme poverty.

The bad habits of media in turn bring out the worst in human cognition. Our intuitions about risk are driven not by statistics but by images and stories. People rank tornadoes (which kill dozens of Americans a year) as more dangerous than asthma (which kills thousands), presumably because tornadoes make better television. It’s easy to see how this cognitive bias – stoked by the news policy ‘if it bleeds, it leads’ – could make people conclude the worst about where the world is heading.

Keep calm, my friends. But as always, if you have any lingering concerns about your investment portfolios, don’t hesitate to call the office at: 973-966-6939.