Should Investors Get Out of the Market? 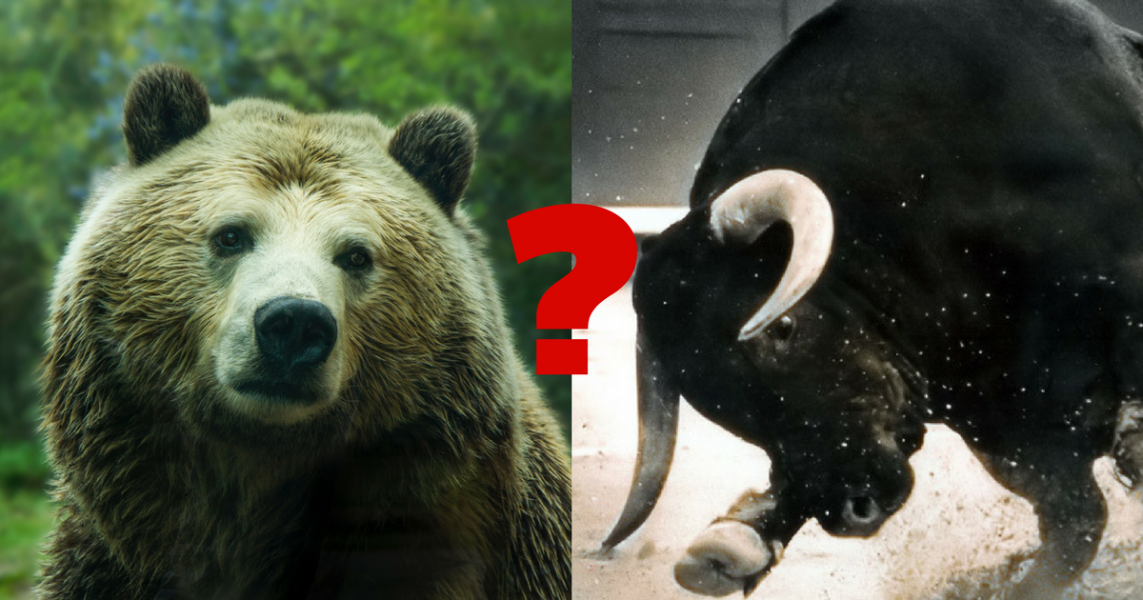 As a financial planner in 2017, there are two questions I receive on almost a daily basis:

President Trump is unlike anything we’ve seen before in national politics. However, it’s possible the very existence of his presidency will produce more Trump-esque candidates.

Every political operative in America got a wake-up call. They witnessed the power of direct access to voters in a decentralized, social media driven society. Trump’s ability to shun the press and drive his own narrative (true or false) struck a nerve in the electorate.

The election is long over, and Donald Trump won. (I know. I know. It’s hard to believe.)

Whether you lean right or left, Trump changed the playing field. But there is some good news, and it was delivered best by a wise political operative who orchestrated his own campaign to the White House brilliantly over 150 years ago: 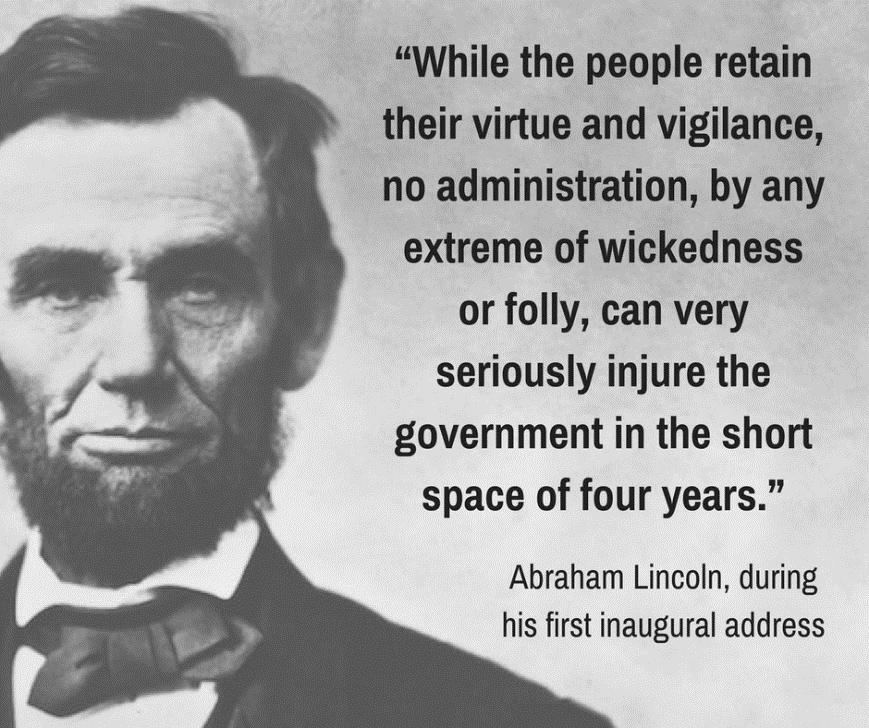 Tick, tick, tick… that sound you hear is the next election approaching, where the American people will once again elect representation. It’s called choice. When would I go into red alert over the state of politics in America? If they ever cancelled an election. The Founding Fathers established regular elections as a tool to maintain political order. If that ever disappeared, you could find me building a cabin in Galt’s Gulch…

But enough about politics, back to the market. It’s at an all-time high, which was inevitable, wasn’t it? Not because of the election, but because the market always goes up- it just doesn’t do it every day, month, or year.

The stock market increases in value, because mankind’s progress on the planet continues its upward trajectory. The market will reach 23,000 then 25,000… eventually breaking through to 30,000.

When? Now that, dear reader, is a question I’m unable to answer –and not just because the lawyers tell me I can’t– but because the exact future is unknowable.

Granted, it has not been a straight moonshot upward. There have been momentary setbacks. Some of them shockingly momentary (can you say Brexit?!) Here are a few of the highlight sell-offs during our current bull market run:

As they say on Wall Street, “the market climbs a wall of worry.” We’ve had our share of worries these past eight years, but none seem to have derailed this freight train of a bull market. 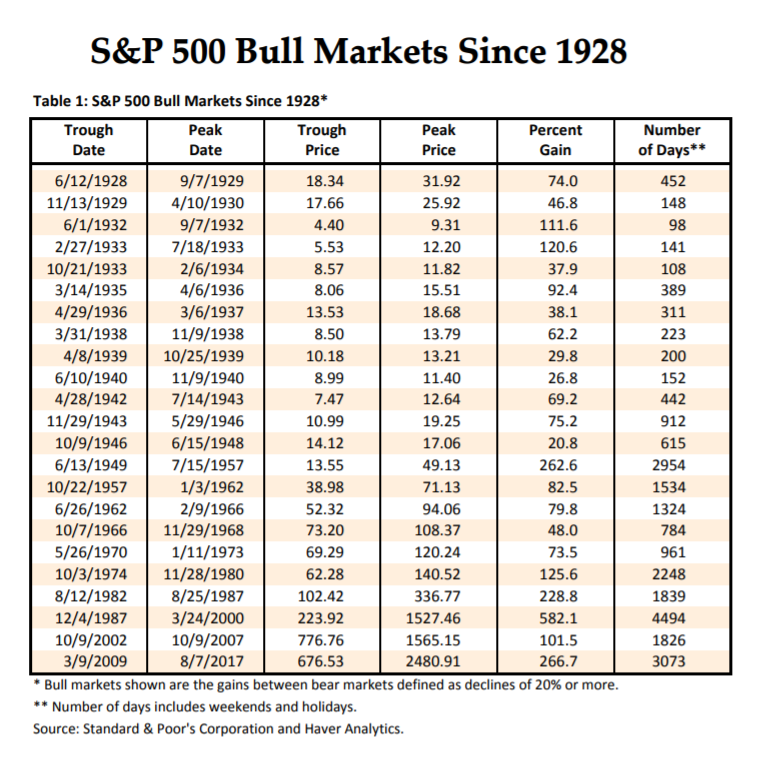 If you study the Yardeni tables and believe as I do, that history is our only true guide, one could argue that this market is overdue for a major sell-off.

Yet, as I’ve stated before, the market doesn’t own a calendar. The market does not realize this “bull” is 3,000 days old without a major 20 percent correction. Short-term corrections are usually caused by a narrative that could/might/possibly turn into a long-term trend. It reminds me of the old joke about economists predicting 20 of the past five recessions….

Oil is at a reasonable price, with no indication of a return to $100+ per barrel prices, and the stock market likes that. Corporate earnings are increasing on a regular basis. All of this puts a smile on Mr. Market’s face, and he continues to climb the wall of transient worries.

Which brings me back to the worried faces I keep seeing in my office. Why are so many folks pessimistic about the present? Bodnar White Paper veterans may be getting bored with my “crisis du jour” and “pouting pundits of pessimism” argument, so let’s drill down a little deeper this time…

When it comes to attracting eyeballs to media stories, market researchers know our brains are wired to want to see the same kind of mayhem fictionalized in the movies and on TV.

Steven Pinker, a renowned Harvard professor of psychology, has suggested this can be attributed to three emotional biases that are baked into our psychology: bad dominates good, the illusion of the good old days, and moralistic competition.

Pinker argues that these all feed into a single cognitive bias called the availability heuristic, which in turn interacts with the nature of news, thereby generating an inclination toward pessimism.

It may be a little too much inside baseball for some of us, but Pinker is eloquently stating what I’ve known to be true in my experience as a financial planner working in the real world: that people are more pessimistic about the world than the evidence warrants.

We all know the world is not a perfect place. Some of us think it’s getting worse. But research -from across the ideological spectrum- indicates that by most measures, there has never been a better time in history to inhabit our planet. A growing body of evidence points to dramatic improvements in human well-being, especially in the developing world.

Pessimism is evolutionary and cultural. For millions of years, humans worried about daily survival. Anthropologists posit that humans evolved by prioritizing bad news. Pessimists took caution to heart, while optimists tended to get eaten by a saber-toothed tiger.

Culturally, many institutions in the West are biased against capitalism and economic growth. Why is that? There is not enough room in this white paper for that one. But, sometimes institutions get caught up in their own narratives. Nelson Mandela is a classic example.

The apartheid regimes that ran South Africa for generations were notorious crony capitalists. South Africa was one of the most regulated countries in the world. Among the first actions Mandela took was to deregulate agriculture and open trade for millions of South Africans.

Despite these free-market advances, many right-wing pundits dismissed Mandela as a “lefty commie.” After he left office, the Left could not bring itself to accept the progress under Mandela’s reforms and allowed the crony capitalists back into power. Growth slowed and progress stalled in South Africa because markets became re-regulated.

There is extensive evidence that shows the “good old days” are happening right now. Choose any metric that breaks your heart while the news tells you how awful the world is: infant mortality, hunger, illiteracy, pollution, poverty. I’m here to tell you the news is not bad. The news is good. Around the world, folks live longer, eat better, read more, live in cleaner conditions, and have greater personal, civil and economic freedom than EVER before. As my wine-making friends would say: “dem’s da facts.”

Are you scratching your head? Wondering why this doesn’t mirror with what you are seeing and hearing on MSNBC, Fox News or PBS? Is it in conflict with what you are reading on Drudge, Huffington Post, and Google News? Not surprising.

As Professor Pinker tells us, our brains are wired for that bad news headline. And that bias is multiplied by the programming mantra: If it bleeds, it leads. It sounds strange, but consuming stories of violence and dread is pleasurable for our caveman brains.

Let me leave you with one last marker that mankind is moving forward, one that has become very popular: inequality. Rather than progress, inequality has become society’s primary focus, which in and of itself, is a sign of progress. The fact that we have the luxury of worrying about sharing proves that we are moving forward.

That fortune would not have been possible without growth. Without the industrial revolution. Without transistors. Without medical research and the development of the germ theory of disease. Growth is not everything, but without it, nothing else really matters.

My gift today is to help you see the progress that humankind has made, and will continue to make, at an ever-increasing speed. Tomorrow will be another “good old day.”

So, back to the question I get daily: Should we get out of the market? If you watch network news and subscribe to opinion journalism, I can see why you are feeling worried. But before you act on fear, look at this graph: 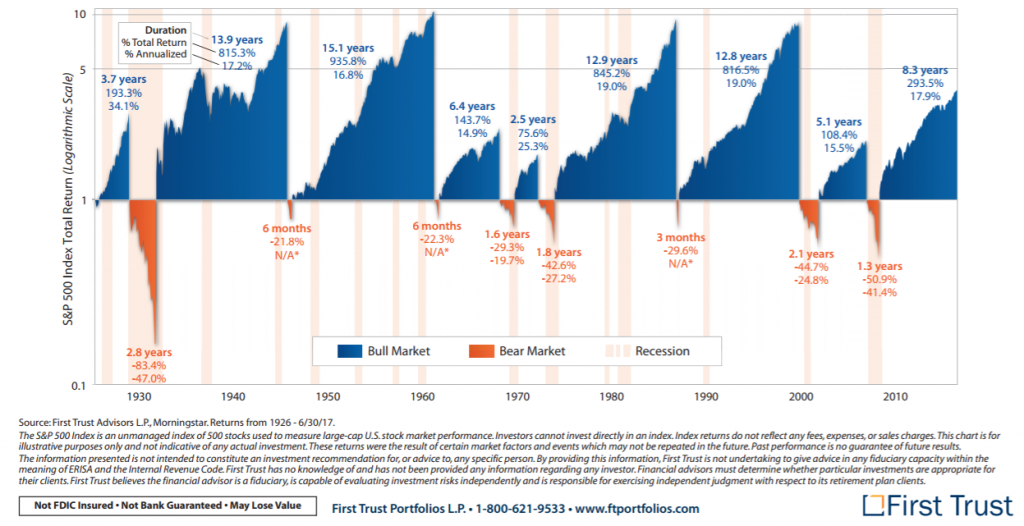 Look at those blue mountains. Amazing.

I ask you, why would anyone – EVER – get out of the market?

My job as your financial advisor is to make sure you have a plan that helps you achieve your life goals with a sense of security. This does not mean timing the market, or predicting winners or losers.

The hall of fame of market timers is an empty room.
–Warren Buffett

If you are stressed about the stock market, or our President’s Twitter account, let’s review your investment policy and asset allocation. The key to surviving regular market hiccups and the occasional 20 percent bear market is to make sure you have sufficient cash assets set aside.

If you are not sure that defines your current situation, call the office and let’s schedule a rendezvous to review your financial planning. In the meantime, fear not. You are in good hands… I got a new guy working in the office: 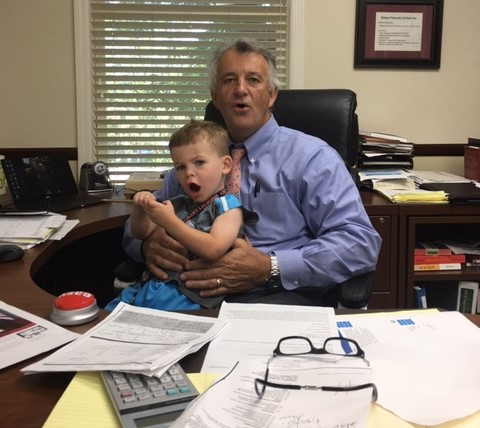